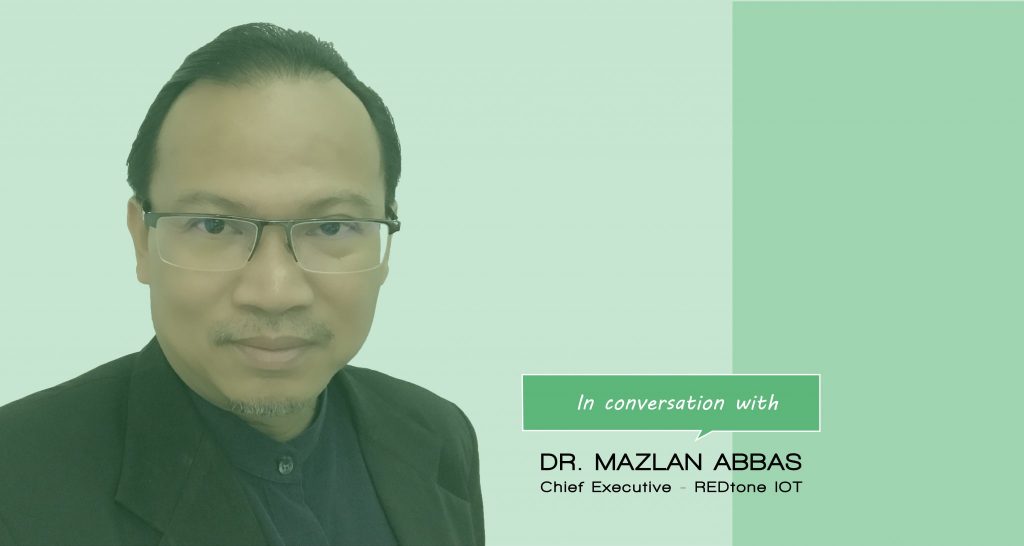 With more than 30 years of experience in the industry as a senior management, Dr. Mazlan has been a part of various verticals of the industry- R&D, product development, technology management, network operations and academia being a few. And so is his list of accomplishments over the years which includes credentials like being ranked No. 20th Thought Leader in IoT by 2014 Onalytics Report – “The Internet of Things – Top 100 Thought Leaders”, ranked Top 10 in IoT Top 100 Influencers by Postscapes, ranked Top 100 in Smart Cities Top Experts by Agilience Authority Index May 2016.

Having been associated with REDtone for 8 years, he looks into enabling businesses to monitor assets such as buildings, machinery, parking lots, electrical appliances, etc. using Internet of Things. One such IoT solutions by REDtone is Smart City, which helps make cities safer, more efficient and resilient via smart devices and sensors.

To know more about the smart city solutions and his insights on IoT industry, IoT India Magazine interacted with Dr. Mazlan Abbas. Read the complete interaction as below:

IoT India Magazine: Would you like to tell us about various products and services that REDtone offers in the IoT domain?

Dr. Mazlan Abbas: REDtone IoT Sdn Bhd is a subsidiary of REDtone International focusing on Smart Cities solutions. Currently we offer a citizen engagement solution whereby citizens can use their smartphones as their IoT devices to file a complaint about any issues related to their cities.

The citizen is required to install a mobile app called CitiAct (available for both Android and iOS), and with simple steps such as taking photos, selecting the category or nature of the problem and writing a short description, they can submit their problems. The photos will be automatically geo-tagged (without the user to describe the location or key-in any address) and submitted to the relevant local councils or any other city authorities responsible to handle such issues. The relevant authority has a system called CMS (Case Management System) that allows them to acknowledge and escalate the complaints to their panel of contractors or handle by themselves. We offer Contractor App that assigns jobs to the relevant contractors who will solve the problem and take photos of the jobs been done and forward back to the authorities for approval. Once the city authorities approve the jobs have been done satisfactorily, they will close the case. Once the case has been closed, automatic notification is sent back to the reporter (the citizen who made the report), thus avoiding any unnecessary calls to customer service.

IoT India Magazine: What steps is REDtone taking in facilitating smart cities across the globe? Would you like to highlight a few use cases?

MA: We have improved the system by having a deep integration with social media such as WhatsApp, Facebook and Twitter. Thus, with CitiAct-to-WhatsApp, CitiAct-to-twitter and CitiAct-to-Facebook, we have made this freely available to 71 major towns and cities in Malaysia, about 31 cities in 5 other countries around the world (Australia, India, Indonesia, Portugal and Vietnam). In fact, any local councils who have made their social media channels publicly available, we can make this easily for their citizens to snap a photo and automatically send directly to their local council’s’ social media channels.

IoT India Magazine: Would you like to tell us more about the Smart City hub, CitiSense? How does IoT forms an integral part of it?

MA: The idea of developing Citisense is to make cities more transparent in handling issues about the cities. This will give a very good impression and brand for any local councils that cares about their cities and citizens. As more sensors are made available (such as Air Quality, Parking, etc), it will be displayed on that portal.

IoT India Magazine: How does CitiAct intend to improve upon the quality of life? What significant role would it play in shaping up smart cities?

MA: Every city has different pain points and should have different approach in developing their smart city solutions. Most smart cities implementations failed because it’s either top-down approach (non-citizen centric approach) or vendor driven. Our smart city approach is to build smart city through the eyes of the citizens. The data gathered from various cities will give better insights on the urgency and importance of which problem is to be solved next. It will also provide better view of the places that require better attention or smart city solutions.

IoT India Magazine: How has been the growth story of RedTone so far? What are the most significant challenges that that are a part of IoT based industry?

MA: Although Smart City seems to be the most hyped topic for the last two years, it’s a challenging project to handle. It’s easier to build smart city solution when it’s a greenfield area. It’s tougher when it’s brownfield since there are so many stakeholders involved in making decisions. Technology is available, but we require a different mindset that have a vision to transform the organization or the nation.

IoT India Magazine: How has the IoT industry evolved with time? Do you see any significant trends in the industry?

MA: There’re two new trends that will evolve from IoT. First, in the enterprise space, it will be the manufacturing or now termed as Industry 4.0 or Industrial IoT. Second, in consumer space, it will be the wearables where we would see new breakthrough in measuring different health parameters easily. It will no longer just about measuring steps.

IoT India Magazine: Do you believe that despite huge demand and need for IoT based technologies, the IoT space seems quite fragmented? Is it anyway closer to be more streamlined?

MA: Yes, it is still fragmented since many companies are still trying out what are the best business models, how to develop better sensors, standardizing different connectivity protocols and managing big data. However, with bigger companies like Apple, Samsung, Google, Amazon and IBM coming into the IoT, we will soon see some streamlining happening.