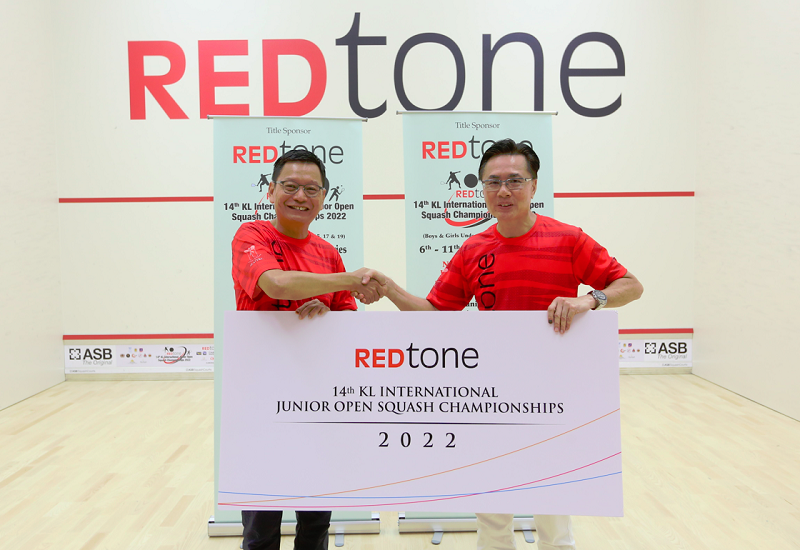 THE ever popular REDtone KL International Junior squash championships will be back in action after a hiatus of two years. No thanks to the Covid-19 Pandemic which saw the biggest junior squash event in Asia.

Now that the situation is back to normal, the organizers and the title sponsor REDtone are happy to see the tourney picking up momentum and riding high as can be gauged from the number of entries received.

The 14th edition has received 821 entries surpassing the 800-mark barrier, just like the previous edition. Total entries for 2019 were 860.

The bulk of the participants come from Malaysia who will be represented by 664 players from all the states including the elite coming from SRAM Bukit Jalil Sports School. Selangor are highest with 176 players followed by Negri Sembilan (64) hosts Kuala Lumpur (55) and Penang (53).

Among the 157 foreigners, Singapore has the biggest number with 45 followed by Korea 32 and Hong Kong 28.

The tournament will be held at two different venues – National Squash Centre in Bukit Jalil and Jalan Duta Squash Courts in Kuala Lumpur from Dec 6-11.

REDtone Group chief executive officer Lau Bik Soon said he was happy that this edition marks the 9th time REDtone has been the title sponsor for the prestigious event.

“It is especially meaningful for us as we emerge from the challenging period whereby the Covid-19 pandemic has forced most sporting events to be suspended since early 2020.

We are also happy to note that the tournament remains as one of the biggest junior events in Asia, a distinction it has held since 2013,“ said Lau, adding that he was happy working with the Squash Racquets Association of Federal Territory Kuala Lumpur partnership.

“We would like to express our thanks and gratitude to SRAFTKL for their steadfast commitment and determination in making the 14th edition a reality,“ said Lau.

SRAFTKL president and organising committee chairman Steven Kwan said he was truly delighted to see that the tournament has not lost its glamour.

“For the 4th year, it has become the Platinum event after being the biggest in Asia (Gold event) since 2013. We hope to see it grow further, added Kwan.

The tournament has made an impressive impact since 2014. Between 2014-2016, it broke the 600 mark while in 2017 & 2018 it smashed the 700 mark. Now for the 4th consecutive time, it has become a platinum event. The tourney which is sanctioned by the Asian Squash Federation (ASF) is the biggest event in Asia and second in the world after the US Junior Open.

The tourney is expected to be stiffly contested, with many top-ranked players vying for honours.