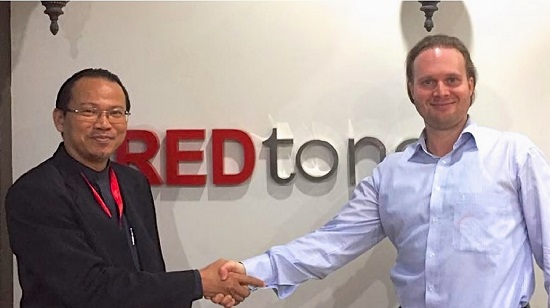 How does it work?
REDtone IOT claims to connect things and aggregate their data to the cloud, transforming businesses and governments by delivering actionable insights. The company’s Smart City Applications and IoT sensors constantly send data to the REDtone’s CitiSense, an IoT middleware that serves as a Smart City Hub. This hub connects, aggregates and stores various sensor data and provides “Sensing-as-a-Service” to anyone who would like better insights into their connected assets, business or environment.

This data is then routed through Unified Inbox’s UnificationEngine, which is an agnostic system that works on any communications channel, and funnels all portals – and all information – through a single, personally controlled communications channel. The UnificationEngine analyses, re-routs and links the data to the appropriate channel, whether it is social media, or the concerned authority.

According to Toby Ruckert, Chief Executive Officer, Unified Inbox, citizens can self-report issues in real-time from their smartphones, as can IoT-enabled connected devices themselves.

For example, a trash bin in a public park is full. A citizen can report it, but just as easily, the trash bin itself can let the city know it is full and needs emptying. Think of smartphones as the world’s most popular IoT devices — their GPS sensors define location, their cameras capture images, their microphones measure noise level, their accelerometer can detect bumps, etc. However, fixed sensors that track garbage trucks can be used to send alerts to people living on the route to let them know of the next garbage pickup time.

Ruckert further says that this integration will increase cities’ safety, efficiency, and resiliency, both across Asia and around the world. Citizens and visitors alike will now be able to communicate with all of their different connected devices on the communications channels they use most including email, SMS, social media, chat/messaging apps, website content management systems, outdoor screens and projectors and more.

The most exciting area of innovation being driven by IoT right now is smart cities and governments. Some of the innovative uses of IoT Messaging for governments here in Asia include UnificationEngine-powered technology for jobs requiring execution, service level and completion alerts, and Unified Inbox’s SHOUT emergency broadcast platform for mission-critical communications.

Ruckert believes that citizens value their privacy. As Facebook and Twitter are hyper-public (meaning instantly seen by everyone and searchable), a citizen may prefer to talk to their government individually instead of through such a public forum. “For example, you’re out really late one night, and you see a full trash bin. If you’re required to post the issue on Facebook or Twitter, you may not, because you really don’t want everyone to know where you are at that late hour. But, if you can share the issue one-on-one with your town — the city council can be a contact in your phone’s address book — the trash bin gets emptied, and your parents never need to know that you were out so late!”

Note that this is a “managed” social interaction, whereby each individual report submitted is officially tracked with a “case ID.” Cases can be easily referred and closed with minimal follow-up calls to the authorities. Security issues on social media most often result from anonymity. Because the government accounts will be fully self-identified and verified, citizens will be able to trust that these are legitimate government accounts.